The effect of tensions, from Space Crystallization cycle

Gallery opening hours:
Monday: closed
Wednesday: 11.00-16.00
Tuesday, Thursday, Friday: 11.00-18.00
Saturday-Sunday: 11.00-17.00
Artistic action conducted by sculptor Ludwika Ogorzelec. Within three weeks a large-format sculpture was created in front of the BWA SOKÓŁ Contemporary Art Gallery building using industrial silk and metal supports. The result of the artistic action is a redefinition of the reality of the existing surroundings of the Gallery's building, which Ludwika Ogorzelec calls "Crystallization of space" and which she realizes in various places around the world. The sculpture will remain on the Gallery's site until it is destroyed by atmospheric conditions.
Three Anankès
On the works
of Ludwika Ogorzelec
— Piotr Bernatowicz

Talking about the reception of her works, Ludwika Ogorzelec often refers to the concept of primary sensitivity of spectators. What is primary sensitivity? The concept would assume the existence of a way of perceiving reality which belongs to every person, however, in the cultural and civilization process it is somehow withdrawn and held back. A work of art, a sculpture as Ogorzelec perceives it, would encourage us to rediscover this way of perceiving reality. One can find here traces of an avant-garde theory of agreement that goes beyond one’s reason, through forms, shapes, colors that accompany an avant-garde work of art. And this seems to be a good track, since form reduction applied by Ogorzelec in her works: “leaves only a line out of a heavy solid made of durable materials” — as she writes originates in the process of reducing the artistic language to the simplest elements of its grammar, initiated by the avant-garde movement. In this text, however, I would like to propose a different approach to the works of Ogorzelec, respecting the concept of primary sensitivity introduced by her. Victor Hugo, great representative of French culture, in his preface to “Toilers of the Sea” described the existence of three basic necessities that determine human existence: “Religion, society and nature, these are three toils of man. These three toils are his three needs; he must believe, therefore he builds temples, he must create, therefore he build the city, and he must live, therefore the plough and the ship”. Let us look at these three, broadly understood areas, as archetypal territories in which we find germs of primary sensitivity. They are somewhat conditioned by these necessities: the foundations of our struggle with the world program its perception and bond humankind on the very basic level. Theybecome sensitive fabric of the existence. Let us look at the works of Ludwika Ogorzelec with reference to those three kinds of struggle, three ananke, as Hugo defined them referring to the Greek goddess, however, reversing the order proposed by the writer.
Nature a moment of balance
The primal life instinct is manifested in the necessity to struggle with gravity, to break its necessity, to aim at breaking off the ground and moving. Her works created in the beginning of the 1980s which formed the “Balancing Devices” cycle, pointed at the imperative to go beyond this fundamental limitation. Balance: a simple and brilliant principle of floating that uses gravity against itself was analyzed in many of her works and often became their main topic. Some sculptures seem to resemble sophisticated scales, in which open-work structures filled with air balance masses of solid wood; there are also sculptures evoking mechanisms we use to deal with resistance: resistance of the ground, the air and the time: ploughs, flying machines, clocks. The material in them — wood — is of primary importance as the artist processes it, depriving it of bark, splitting into narrow spills but preserving the natural course of fibers. They become entities existing between two worlds: nature and human activity. They seem to be complex devices, in whose structure a secret sense of the mechanism is encoded, but at the same time they are organic structures that grow and annex the space with their bow-shaped shoots. One should mention here the work titled „An Apple Tree That Ran Wild”, created in the Ujazdowski Castle Center for Contemporary Art in Warsaw in 1994. The sculpture, like a real apple tree, seems to grow out of the ground near the building and then is transformed into a walking machine that gradually takes off the ground and heads towards the building window. Inside the building, the sculpture changes its shape, adjusting to the humanmade space — it is socialized. 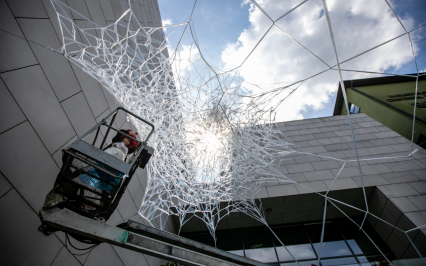 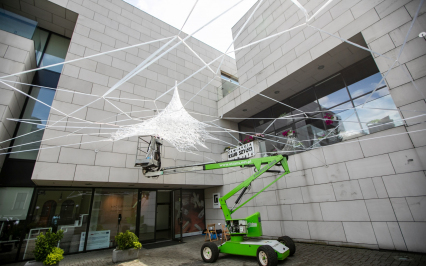 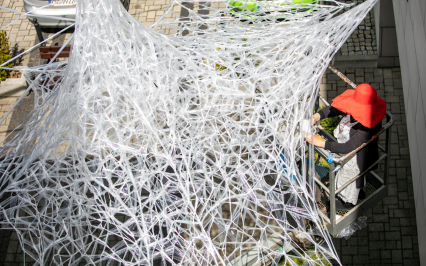 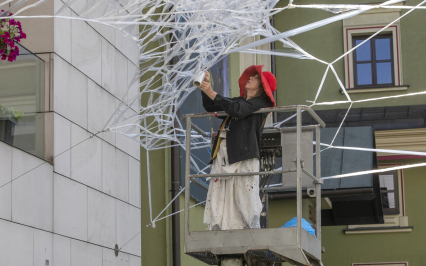 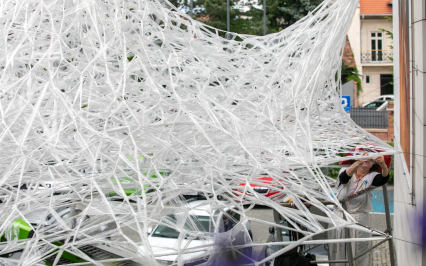 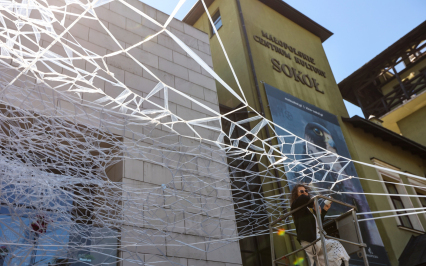 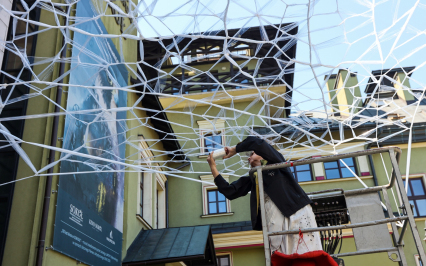 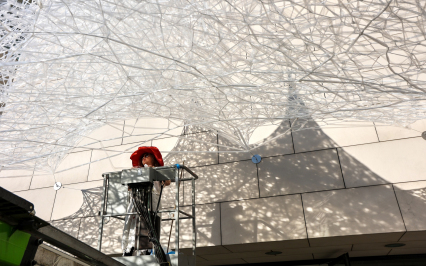 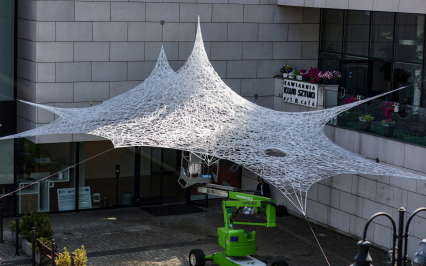 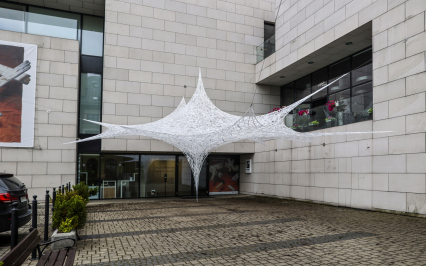 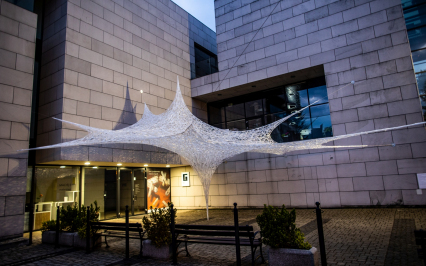 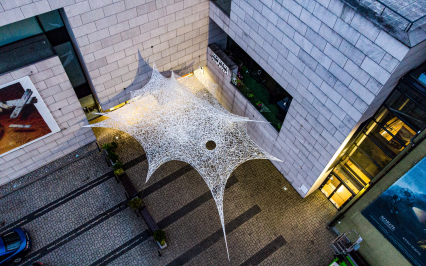 Society — relationships
In the human world, in society, relationships, interdependencies between society members, smaller and larger groups are of key importance. Though invisible, they fill the urban space, the space of buildings, squares and streets. Ludwika Ogorzelec uses these places in her “Space Crystallization” cycle, incorporating between the walls — but also transgressing them — sculptures whose only visible element is a line made of cellophane. But the substance of the sculpture is not only the line, but everything that a network of lines reveals, everything that becomes visible and perceptible thanks to them. A cellophane line spread next to modern office buildings and on the courtyards of medieval castles outlines this complicated network of relationships, taking them out of the necessity of time and transferring them into another dimension. The module is the same, regardless of the era — just like human relationships are also the same, though they form a unique pattern. This makes understanding possible, or compassion, because this is not a process of simple communication. Stefan Kisielewski once coined a term of “non-semantic art” referring to music, when he tried to defend it against communist ideologists. This does not mean that such art does not convey meanings, but this is not a simple form of communication one can see in everyday life when using mass media or reading newspapers. Classical music, as well as the works of Ludwika Ogorzelec, is useless in promoting politically and socially engaged content. It functions differently on a different level, though it does not escape the human world — on the contrary — it is possible only in this area. Ludwika Ogorzelec’s “Space Crystallizations” speak about the existence of tension, the need to find an asylum, intimacy as well as about an attempt at reaching another person; about divisions between people, but also about the possibility of overcoming such divisions. They show what is invisible in everyday life to make us sensitive to what we experience every day. Man — his movement, becomes part of the sculpture. His presence is incorporated in its form; elements of the sculpture — as we could see in “Stratification II” in Ujazdowski Castle Center for Contemporary Art in Warsaw, and in her last work “Ramp” in the Silesian Museum in Katowice enter into relations with spectators, forcing them to change their body posture, to bend, move along a narrow corridor, but also create unexpected perspectives for the perception of particular space which has not been noticeable before. They also become an element of the passage literally: they lead to something else, but also metaphorically: through their non-semantic aspect, to use Kisielewski’s term, they allow us to clear the spectator’s perception from the layer of loud, but in fact perishable and ephemeral meanings which contemporary times force upon us and it allows us to prepare to meet something unusual and unknown, which can be defined as sacrum.
Sacrum – the meeting
Just as it is difficult to find simple references to the social and political sphere in Ludwika Ogorzelec’s works, it is equally hard to find clear references to the religious sphere. Can it be then claimed that the area of sacrum is totally eliminated from her work? Well, her spatial forms make me draw different conclusions. I would like to refer here to two latest works of Ludwika Ogorzelec: the exhibition titled “I Seek the Moment of Balance” in the Ujazdowski Castle Centre for Contemporary Art in 2020 and the ”Underground Exhibition” in the Silesian Museum in Katowice opened in 2022. Both exhibitions have a similar structure. They invite us to take a walk, to go through a passage. They begin with the sculptures made of wood that refer to the issue I mentioned at the beginning of this text — namely of gravity and overcoming it. These are works titled “Anti- Gravity” and “Anti-Gravity II”. The next part is “Space Crystallization”, made of a cellophane line, engage spectators, force them to move, to fit physically in the space of the sculpture. In both exhibitions there is also a certain final point, a room in which the wander and the “non-semantic narration” culminate: in the Ujazdowski Castle it was a room of the castle tower in a form of an octagon, in the Silesian Museum — impressive space on a square foundation, resembling a coalmine shaft, lightened up at the top. In these spaces, Ludwika Ogorzelec spread a metal net, which constitutes a basis for glass elements,scattered in space. Glass, as Ogorzelec wrote in her manifesto, “is a technological matter, cold, heavy, dangerous in contact with the body, transparent, changeable depending on the light — evoking equally positive and negative emotions”. It is thus the most remote and alien to people matter of all that Ogorzelec uses in her works, but also the most interesting esthetically. The composition vector of her sculptures that use glass is also different. While wood accounts for the ascending movement, here we have a descending direction, to the bottom. There is an impression of a physical threat to the spectators, but also the fascination with cold and shiny form. All these elements account for the fact that in these sculptures one can see the primary struggle with the sacrum, with a different, alien space, which descends to the man, but which seems dangerous, distant and unreachable. In central spaces, dominated by the vertical axis, Ogorzelec’s sculptures become abstract, spatial stained glass. Seeing and experiencing their crystal structure makes spectators, regardless of the time and place, expect to meet something that exceeds the horizon of our existence.